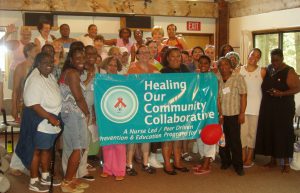 HOCC is for all women, infected with, affected by or at-risk for HIV/AIDS. HOCC reaches out to the communities most affected by HIV infection and most at risk for poor health outcomes due to race, class, gender, and sexuality.  The women who attend HOCC are largely inner- city women of color (nearly 80%) from the Greater Boston area.  About 70% of HOCC HIV+  women live at or below the poverty level, and many are disabled. Within the first two weeks of each month, nearly 40% of the HOCC women lack the resources (money or food) to have three meals a day for either their children and/or themselves. The mean age of HOCC women is 46 (age range 14-81), and over half did not graduate from high school. Nearly 70% of HOCC women have experienced depression in their lifetime, with most having experienced a depressive episode since learning their HIV status. Close to 100% of the HOCC women have a history of childhood sexual abuse, domestic violence and/or are currently engaged in an abusive relationship. A history of violence as a child or as an adult is frequently reported among women living with HIV. Domestic violence (DV) is often an under-recognized barrier to women’s ability to access regular medical care for HIV/AIDS as it relates to abuser interference, and feelings of shame and stigma. Domestic violence increases women’s risk for illness progression when the abuse prevents women from accessing health care or their ability to take HIV medicines on a consistent basis. Women’s risk for violence is further increased when they attempt to negotiate for safer sex and condom use, and therefore puts them at greater risk for HIV infection and transmission. Most HOCC women report HIV infection via heterosexual sex. From 1999 to 2008, the proportion of HIV diagnoses among females exposed to HIV through heterosexual sex with partners of unknown risk and HIV status (presumed heterosexual sex) increased from 30% to 45%.